Book suggestions for The Witcher 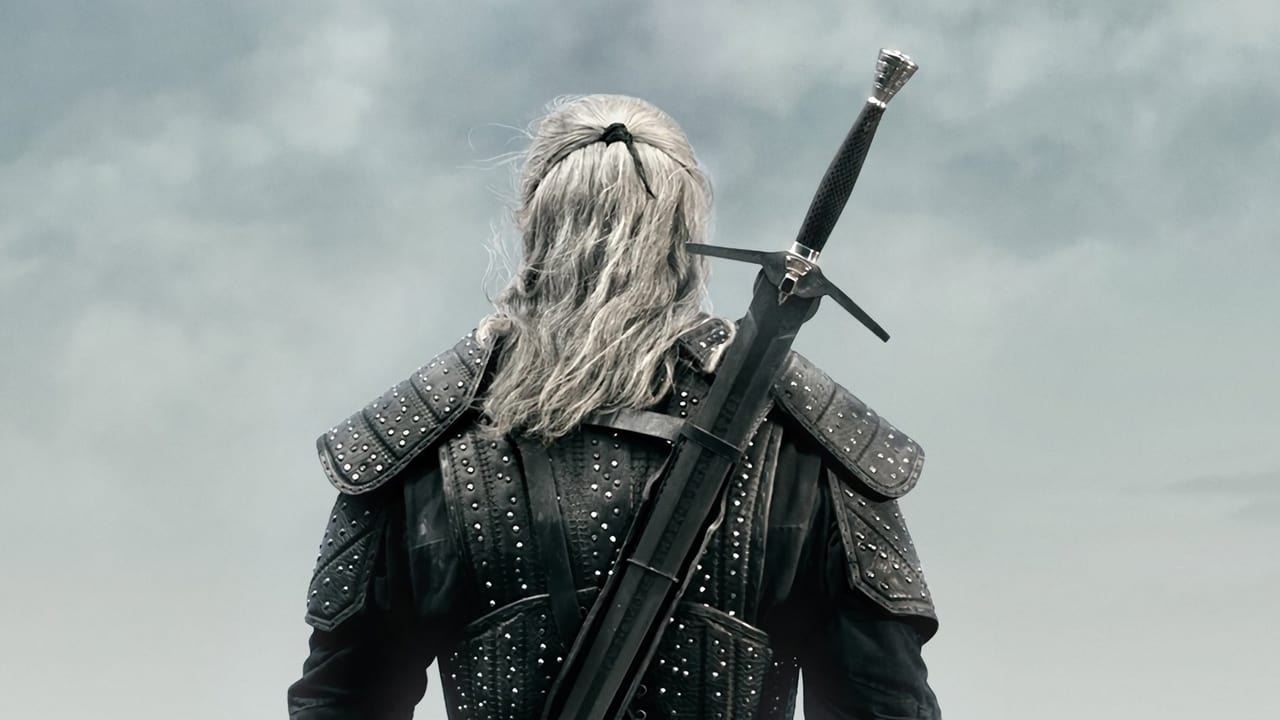 The Name of the Wind

Discover #1 New York Times-bestselling Patrick Rothfuss’ epic fantasy series, The Kingkiller Chronicle. “I just love the world of Patrick Rothfuss.” —Lin-Manuel Miranda • “He’s bloody good, this Rothfuss guy.” —George R. R. Martin • “Rothfuss has real talent.” —Terry Brooks OVER 1 MILLION COPIES SOLD! DAY ONE: THE NAME OF THE WIND My name is Kvothe. I have stolen princesses back from sleeping barrow kings. I burned down the town of Trebon. I have spent the night with Felurian and left with both my sanity and my life. I was expelled from the University at a younger age than most people are allowed in. I tread paths by moonlight that others fear to speak of during day. I have talked to Gods, loved women, and written songs that make the minstrels weep. You may have heard of me. So begins a tale unequaled in fantasy literature—the story of a hero told in his own voice. It is a tale of sorrow, a tale of survival, a tale of one man’s search for meaning in his universe, and how that search, and the indomitable will that drove it, gave birth to a legend. Praise for The Kingkiller Chronicle: “The best epic fantasy I read last year.... He’s bloody good, this Rothfuss guy.” —George R. R. Martin, New York Times-bestselling author of A Song of Ice and Fire “Rothfuss has real talent, and his tale of Kvothe is deep and intricate and wondrous.” —Terry Brooks, New York Times-bestselling author of Shannara "It is a rare and great pleasure to find a fantasist writing...with true music in the words." —Ursula K. Le Guin, award-winning author of Earthsea "The characters are real and the magic is true.” —Robin Hobb, New York Times-bestselling author of Assassin’s Apprentice "Masterful.... There is a beauty to Pat's writing that defies description." —Brandon Sanderson, New York Times-bestselling author of Mistborn

Naomi Novik opened a brilliant new chapter in an already acclaimed career, delving into the magic of fairy tales to craft a love story that was both timeless and utterly of the now. Spinning Silver draws readers deeper into this glittering realm of fantasy, where the boundary between wonder and terror is thinner than a breath, and safety can be stolen as quickly as a kiss. Miryem is the daughter and granddaughter of moneylenders, but her father’s inability to collect his debts has left his family on the edge of poverty—until Miryem takes matters into her own hands. Hardening her heart, the young woman sets out to claim what is owed and soon gains a reputation for being able to turn silver into gold. When an ill-advised boast draws the attention of the king of the Staryk—grim fey creatures who seem more ice than flesh—Miryem’s fate, and that of two kingdoms, will be forever altered. She will face an impossible challenge and, along with two unlikely allies, uncover a secret that threatens to consume the lands of humans and Staryk alike. Praise for Spinning Silver “A perfect tale . . . A big and meaty novel, rich in both ideas and people, with the vastness of Tolkien and the empathy and joy in daily life of Le Guin.”—The New York Times Book Review “Gorgeous, complex, and magical . . . This is the kind of book that one might wish to inhabit forever.”—Publishers Weekly (starred review) “Cool and clever and . . . dire and wonderful.”—Laini Taylor, author of Strange the Dreamer “The Rumpelstiltskin fairy tale has never been as captivating. . . . Spinning Silver further cements [Novik’s] place as one of the genre greats.”—Paste

The Witcher, Geralt of Rivia, becomes the guardian of Ciri, surviving heiress of a bloody revolution and prophesied savior of the world, in the first novel of the New York Times bestselling series that inspired the Netflix show and the hit video games. For over a century, humans, dwarves, gnomes, and elves have lived together in relative peace. But times have changed, the uneasy peace is over, and now the races are fighting once again. The only good elf, it seems, is a dead elf. Geralt of Rivia, the cunning assassin known as the Witcher, has been waiting for the birth of a prophesied child. This child has the power to change the world -- for good, or for evil. As the threat of war hangs over the land and the child is hunted for her extraordinary powers, it will become Geralt's responsibility to protect them all. And the Witcher never accepts defeat. Andrzej Sapkowski, winner of the World Fantasy Lifetime Achievement award, started an international phenomenon with his Witcher series. Now, look out for The Tower of Fools, book one of Andrzej Sapkowski's Hussite Trilogy, coming in October 2020! Witcher novelsBlood of ElvesThe Time of ContemptBaptism of FireThe Tower of SwallowsLady of the LakeSeason of Storms Witcher collectionsThe Last WishSword of Destiny The Malady and Other Stories: An Andrzej Sapkowski Sampler (e-only) Translated from original Polish by Danusia Stok.

Before They Are Hanged

How do you defend a city surrounded by enemies and riddled with traitors, when your allies can by no means be trusted, and your predecessor vanished without a trace? It's enough to make a torturer want to run -- if he could even walk without a stick. Northmen have spilled over the border of Angland and are spreading fire and death across the frozen country. Crown Prince Ladisla is poised to drive them back and win undying glory. There is only one problem -- he commands the worst-armed, worst-trained, worst-led army in the world. And Bayaz, the First of the Magi, is leading a party of bold adventurers on a perilous mission through the ruins of the past. The most hated woman in the South, the most feared man in the North, and the most selfish boy in the Union make a strange alliance, but a deadly one. They might even stand a chance of saving mankind from the Eaters -- if they didn't hate each other quite so much. Ancient secrets will be uncovered. Bloody battles will be won and lost. Bitter enemies will be forgiven -- but not before they are hanged. First Law Trilogy The Blade Itself Before They Are Hanged Last Argument of Kings For more from Joe Abercrombie, check out: Novels in the First Law world Best Served Cold The Heroes Red Country

Winner of the L.A. Times Ray Bradbury Prize Finalist for the 2019 National Book Award The New York Times Bestseller Named a Best Book of 2019 by The Wall Street Journal, TIME, NPR, GQ, Vogue, and The Washington Post "A fantasy world as well-realized as anything Tolkien made." --Neil Gaiman "Gripping, action-packed....The literary equivalent of a Marvel Comics universe." --Michiko Kakutani, The New York Times The epic novel, an African Game of Thrones, from the Man Booker Prize-winning author of A Brief History of Seven Killings In the stunning first novel in Marlon James's Dark Star trilogy, myth, fantasy, and history come together to explore what happens when a mercenary is hired to find a missing child. Tracker is known far and wide for his skills as a hunter: "He has a nose," people say. Engaged to track down a mysterious boy who disappeared three years earlier, Tracker breaks his own rule of always working alone when he finds himself part of a group that comes together to search for the boy. The band is a hodgepodge, full of unusual characters with secrets of their own, including a shape-shifting man-animal known as Leopard. As Tracker follows the boy's scent--from one ancient city to another; into dense forests and across deep rivers--he and the band are set upon by creatures intent on destroying them. As he struggles to survive, Tracker starts to wonder: Who, really, is this boy? Why has he been missing for so long? Why do so many people want to keep Tracker from finding him? And perhaps the most important questions of all: Who is telling the truth, and who is lying? Drawing from African history and mythology and his own rich imagination, Marlon James has written a novel unlike anything that's come before it: a saga of breathtaking adventure that's also an ambitious, involving read. Defying categorization and full of unforgettable characters, Black Leopard, Red Wolf is both surprising and profound as it explores the fundamentals of truth, the limits of power, and our need to understand them both.

In a world of blood and magic, a powerful epic fantasy begins... AN EMPEROR'S DAUGHTER WHO WILL NOT BE DENIED Just before her sixteenth birthday, Princess Katerina is refused her rightful place as heir to the Empire of the Ice-Bear--solely because of her sex. Determined to regain her inheritance, she murders the foreign lord she's been ordered to marry and embarks on a perilous voyage to the lush, tropical islands of the Laut Besar in search of the vast wealth and power she needs to claim the Empire for herself. A PRINCE FORCED TO TAKE A STAND On a small island kingdom, Prince Arjun's idyllic life is shattered when a malignant sorcerer invades, slaughters his people and steals the sacred sword of Jun's ancestors. With his royal father dead and his palace in ruins, Jun reluctantly tracks the sorcerer and the magical blade far across the pirate-infested waters of the Laut Besar. A SORCERER SEEKING TO DESTROY THE WORLD Long ago the powerful relics known as the Seven Keys were used to safely lock away the terrifying evils of the Seven Hells. With Jun's ancient sword in his grasp, the sorcerer Mangku has claimed the first Key, and begun his mission to unleash catastrophe upon the land. As the destinies of these three entwine in the lawless islands of the Laut Besar, the fate of humanity hangs in the balance. For if the sorcerer cannot be stopped, the world itself will be unmade...